Our Rotarod for Mice and/or Rats is a classic tool to reveal deficits in motor coordination. Our latest version is equipped with a touchscreen for more convenience.

Five animals (rats or mice) are placed on a rod, whose rotation speed is controlled by the experimenter. The time the animal stays on the rod before falling is an indicator of the sensori-motor coordination, the balance, the endurance. This test is often used to reveal the effects of a drug or a genetic modification on the motor coordination.

We developed Rotarods on which both rats and mice may be tested.

This apparatus consists of an aluminum structure covered in PVC plates. Partitions delimit five zones, each zone being equipped with an independent floor sensor to detect falls. A push button, located in front of each compartment, triggers a chronometer that is ended by the detection of the fall. The rotating bar is mounted on two bearings; it is rotated by a DC gear motor through a pulley-belt transmission, maximum speed: 80 rpm.

The foldable touchscreen, which may be used with gloves, allows: 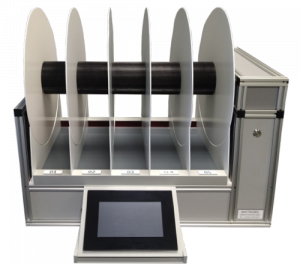 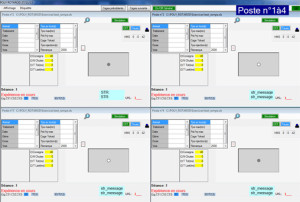 button and a fall detection. A LED indicates that an experiment is being conducted, for each compartment. Controlling the Rotarod with a computer brings several advantages:

The results are stored in a Microsoft Excel file.