Our Fear-Shuttle apparatus plays both roles of a Shuttle-Box and a double Fear conditioning apparatus. Moreover, everything has been facilitated to couple behavior analyses with optogenetics and electrophysiology.

We developed an apparatus that may be used either as a Shuttle Box or as a double Fear conditioning chamber.

The aparatus, initially designed for mice, is composed of:

We propose several options to facilitate the coupling of the behavior analysis and external techniques such as electrophysiology and optogenetics: 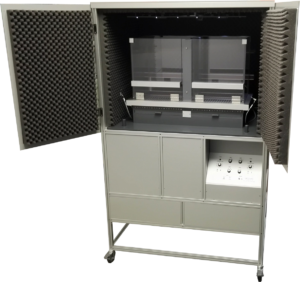 POLY Files softwares analyzes the data acquired from POLY FEAR and POLY AVOIDANCE. A great number of variables may be calculated, e.g.:

Additionally to these variables, some are specific to the avoidance:

POLY Files software is open, so that any user may create his own variables. However, all the variables detailed above are provided at the installation.
The results are displayed in a .xls datasheet file.